I am making a NW.js app on Mac, and want to run the app in dev mode by double-clicking on an icon. First step, I’m trying to make my shell script work.

Using VSCode on Windows (I wanted to gain time), I have created a run-nw file at the root of my project, containing this:

but I get this output:

Not able to make it work properly, and suspecting something weird with the file itself, I created a new one directly on the Mac, using vim this time. I entered the exact same instructions, and… now it works without any issue.
A diff on the two files reveals exactly zero difference.

What can be the difference? What can make the first script not work? How can I find out?

Following the accepted answer’s recommendations, after the wrong line endings came back, I checked multiple things. It turns out that since I copied my ~/.gitconfig from my Windows machine, I had autocrlf=true, so every time I modified the bash file under Windows, it re-set the line endings to \r\n.
So, in addition to running dos2unix (which you will have to install using Homebrew on a Mac), if you’re using Git, check your config.

Yes. Bash scripts are sensitive to line-endings, both in the script itself and in data it processes. They should have Unix-style line-endings, i.e., each line is terminated with a Line Feed character (decimal 10, hex 0A in ASCII).

DOS/Windows line endings in the script

With Windows or DOS-style line endings , each line is terminated with a Carriage Return followed by a Line Feed character. You can see this otherwise invisible character in the output of cat -v yourfile:

In this case, the carriage return (^M in caret notation or \r in C escape notation) is not treated as whitespace. Bash interprets the first line after the shebang (consisting of a single carriage return character) as the name of a command/program to run.

Like above, if you have an input file with carriage returns:

then it will look completely normal in editors and when writing it to screen, but tools may produce strange results. For example, grep will fail to find lines that are obviously there:

Appended text will instead overwrite the line because the carriage returns moves the cursor to the start of the line:

String comparison will seem to fail, even though strings appear to be the same when writing to screen:

The solution is to convert the file to use Unix-style line endings. There are a number of ways this can be accomplished:

With the Bash port for Cygwin, there’s a custom igncr option that can be set to ignore the Carriage Return in line endings (presumably because many of its users use native Windows programs to edit their text files).
This can be enabled for the current shell by running set -o igncr.

Setting this option applies only to the current shell process so it can be useful when sourcing files with extraneous carriage returns. If you regularly encounter shell scripts with DOS line endings and want this option to be set permanently, you could set an environment variable called SHELLOPTS (all capital letters) to include igncr. This environment variable is used by Bash to set shell options when it starts (before reading any startup files).

The file utility is useful for quickly seeing which line endings are used in a text file. Here’s what it prints for for each file type:

The GNU version of the cat utility has a -v, --show-nonprinting option that displays non-printing characters.

Wikipedia has an excellent article covering the many different ways of marking the end of a line of text, the history of such encodings and how newlines are treated in different operating systems, programming languages and Internet protocols (e.g., FTP).

With Classic Mac OS (pre-OS X), each line was terminated with a Carriage Return (decimal 13, hex 0D in ASCII). If a script file was saved with such line endings, Bash would only see one long line like so:

Since this single long line begins with an octothorpe (#), Bash treats the line (and the whole file) as a single comment.

Note: In 2001, Apple launched Mac OS X which was based on the BSD-derived NeXTSTEP operating system. As a result, OS X also uses Unix-style LF-only line endings and since then, text files terminated with a CR have become extremely rare. Nevertheless, I think it’s worthwhile to show how Bash would attempt to interpret such files.

On JetBrains products (PyCharm, PHPStorm, IDEA, etc.), you’ll need to click on CRLF/LF to toggle between the two types of line separators (\r\n and \n). 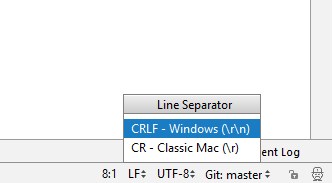 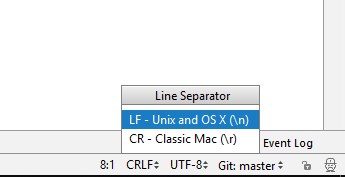 If you’re using the read command to read from a file (or pipe) that is (or might be) in DOS/Windows format, you can take advantage of the fact that read will trim whitespace from the beginning and ends of lines. If you tell it that carriage returns are whitespace (by adding them to the IFS variable), it’ll trim them from the ends of lines.

In bash (or zsh or ksh), that means you’d replace this standard idiom:

If you’re not using the IFS= prefix (e.g. because you want to split the data into fields), then you’d replace this:

If you’re using a shell that doesn’t support the $'...' quoting mode (e.g. dash, the default /bin/sh on some Linux distros), or your script even might be run with such a shell, then you need to get a little more complex:

Note that normally, when you change IFS, you should put it back to normal as soon as possible to avoid weird side effects; but in all these cases, it’s a prefix to the read command, so it only affects that one command and doesn’t have to be reset afterward.