Today after hours of debugging, I learned in the hard way that:

A parent element is never able to cover (stack on top of) its child element if the parent has a z-index of any value, no matter how you change the child’s CSS

How can I understand this behavior by logic? Is it in the specs? 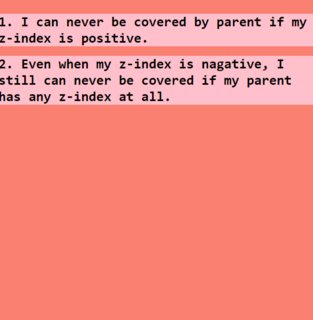 There are two important things you need to know: the painting order and the stacking context. If you refer to the specification, you can find how and when elements are painted.

For a positioned box, the z-index property specifies:

Values have the following meanings:

Now we have all the information to better understand each case. If the parent element has a z-index value of something other than auto, then it will create a stacking context, thus the child element will be painted inside whatever their z-index is (negative or positive). The z-index of the child element will simply tell us the order of painting inside the parent element (this covers your second point).

Now, if only the child element has a positive z-index and we set nothing on the parent element, then considering the painting order, the child will be painted later (in step (9)) and the parent in step (8). The only logical way to paint the parent above is to increase the z-index, but doing this will make us fall into the previous case where the parent will establish a stacking context and the child element will belong to it.

The only case where we can have a child below its parent is to set a negative z-index on the child element and keep the parent at z-index: auto, thus this one will not create a stacking context and following the painting order the child will be painted first.

Some important facts that we can conclude from the above:

1: there is some hacky ways if we consider the use of 3D transformation.

Example with an element going under its parent element even if this one has a z-index specified.

Another example where we can place an element between two elements in another stacking context:

We can also have some crazy stacking order like below:

We should note that using such hack may have some side effect due to the fact that transform-style, perspective and transform will affect position:absolute/fixed element. Related: Why does applying a CSS-Filter on the parent break the child positioning?

A good way to think about this is that each parent contains its own stacking context. Sibling elements share a parent’s stacking order and may, therefore, overlap each other.

The only way to remove an element from its parent’s context is using position: fixed since this essentially forces it to use the window for context.

The Mozilla documentation does say

The z-index CSS property sets the z-order of a positioned element and its descendants or flex items.

Here’s some additional logic from another StackOverflow article relating to children vs descendants.